I was thrilled, pun intended, to have The Empathic Detective listed with NewInBooks’ post The Best Summer Reads: Heart Stopping Thrillers by Sarah Pannenberg. Head over there to read up on five other thrillers, including the newest titles by Daniel Judson and Brad Thor.

I’ve been blessed to have The Empathic Detective selected as a Kindle Scout title and published through Amazon’s Kindle Press. But one of the other big blessings in belonging to the Kindle Scout family is the ongoing companionship with other KP authors.

We stay in touch via Facebook, including a public group here, and every Friday we tweet about our books on Twitter. (Look up the hashtag #kpauthors). Finally, we have an official website featuring our books and other materials here.

It’s encouraging to know each Kindle Scout book is carefully selected by the Kindle Press team for publication. Any KP title you purchase (or read through Kindle Unlimited) has been thoroughly vetted, and most tend to maintain high four or five star reader reviews on Amazon.

So download a Kindle Press book today, and don’t forget to nominate new titles over at Kindle Scout for the opportunity to receive free copies selected for publication.

Facebook has been successful for me, and from what I have read many other authors enjoy the benefits of advertising there, too. It’s got at least two things going for it, in my opinion. First, it can be relatively cheap. You can set up a daily budget of $5 or $10, and get clicks to your books for a few cents each. Second, Facebook provides a wealth of options when setting up ads, offering to send them to users in very detailed demographics then showing the results from those demographics.

Besides running ads, Facebook also offers options to boost specific posts, making sure more people read it and achieve different objectives such as clicking on your book’s page or your webpage, gaining more “likes” for your Facebook page, etc. Here’s the list of ad campaign objectives available:

All told, ads on Facebook are well worth looking into. There are several tutorials online that go into much better details about how to be effective with Facebook ads, and quite a few blog posts like this one that are worth your time.

One of the most well known set of tutorials is by Mark Dawson. At the very least, check out his free offerings.

It’s out! The Empathic Detective: A Mystery Thriller is up for sale on Amazon, at $2.99. 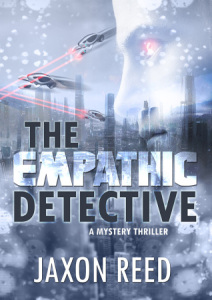 The Empathic Detective is up for pre-order, and everyone who nominated it on Kindle Scout should be getting their e-mail from Amazon detailing how to download their free copy!

If you missed out on nominating the book, you can pre-order a copy for $2.99 by clicking here.

Thanks again for all your support, and please leave a review for the book. It will be released for sale on May 3.

Running an ad campaign on Twitter provides some interesting benefits. If you’ve ever tweeted something out and wondered how successful it was, once you become a Twitter advertiser you’ll get tools that let you see performance stats on all your tweets. That alone is worth the price of admission, in my opinion. Once logged into Twitter, under your Profiles and Settings, click Twitter Ads to get started.

Twitter provides some good info on what people do with your tweets. Under the Analytics page, you can see your most popular tweets, find the number of impressions they made (number of times they showed up for other people), the number of engagements, and the engagement rate percentage. Obviously, those tweets with a higher engagement rate are more successful than others.

Engagements include detail expansions, likes, when a user clicks on your profile from the tweet, retweets other users give you, clicks on links in the tweet, number of people who decided to follow you after reading the tweet, hashtag clicks, and engagement with media linked in the tweet.

Under Promotions, Twitter lets you pay to keep a tweet active. For instance, it can show up in your followers’ tweet streams or stay near the top of a hashtag list. Twitter will offer goals for your tweets, such as link clicks, or additional followers. These vary by price. The more you pay, the longer the tweet stays active, and the greater number of results. Ten dollars is a reasonable sum to play around with to get a feel for what you’re doing.

Twitter ads can easily get expensive, but they do seem to be one way to spread the word about a book. Again, book sales seem to be a numbers game. If a hundred people look at your book’s page online, maybe a few will buy it. Paying too much for people to look at the page will quickly outstrip the royalties received from sales.

Many thanks to all who nominated The Empathic Detective on Kindle Scout. The Kindle Press team has selected it for publication. If you nominated it, Amazon will send details on how to obtain your free copy in the coming weeks.

We’re in the home stretch, and these are the final few days to nominate The Empathic Detective on Kindle Scout. If they publish the book, you’ll get a free Kindle copy! Take a moment to head over to my campaign page and nominate it.

We’ve left less than two weeks to go for you to nominate The Empathic Detective on Kindle Scout. Remember, if Kindle Press decides to publish the book, those who nominated it will receive a free copy from Amazon.

We’re almost a week into my Kindle Scout campaign for The Empathic Detective. If you haven’t nominated it for publication already, please do so!

While you’re there, here are a couple other books that I think are worthy of nomination, too.

Cheatc0de.  Play the game. Play to win. Play to survive.