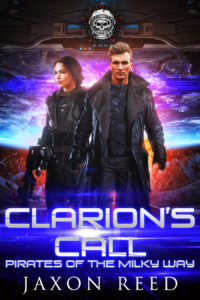 Author’s Note: the Prologue for Clarion’s Call is a bonus chapter titled “Unleashed on Raton Five, Part One,” available in the Amazon version or Patreon.

“Come on, you two. You can do better. Wotta bunch of weenies.”

Granny put both fists on her hips and looked down on the mat where Skylar and Raquel lay panting. They were all barefoot and wearing gym shorts below their t-shirts.

“I don’t get it,” Skylar said between breaths. “How can someone so petite be so strong?”

“I don’t get how someone so old can be in such good shape,” Jillian said, equally winded.

“Okay that does it, missies. Get up so I can kick your butts again.”

Both younger women sprang up from the mat and rushed Granny at the same time. She sidestepped and tripped Skylar, then swung around and grabbed Jillian’s arm, turning her forward momentum into a flip.

Jillian fell end over end and landed on the mat again with a loud, Splat!

“Who looks old and petite now?” Granny said. She cackled and walked over to offer the women a hand up.

They were a week into the voyage to Pegasi Station aboard the Ultima Mule, and already the three had formed a bond while sharing quarters.

Skylar and Jillian, closer in age, had more to talk about with each other. In previous voyages, Skylar kept mostly to herself, interacting with her brother Samuel and rarely spending time with others. Now that he was gone, she turned to these two for companionship.

Granny served in a matronly role, freely offering advice. She also willingly served as the odd person out for the other two to gripe about.

Granny said, “Two women are friends. With three women, someone is going to become the target of the other two. So I’ll be you gals’ target. If you can hit me!”

Indeed, Skylar and Jillian found themselves griping about the older woman frequently. Part of it had to do with their inability to take her down during these sparring sessions.

“What do you call this again? What’s this style?” Jillian said.

Granny said, “The flips are from Aikido. It’s a type of fighting that uses your opponent’s weight against them. It’s particularly useful for women because the fellas are usually bigger than we are.

“Now, my other techniques are based on Krav Maga. That’s for close quarters combat. You girls need to learn some fundamentals, first. Like how to roll when you fall. If you were to have gone down on a hard floor like that, Princess, you might have busted your neck.”

Granny grinned at them and pulled out a cigar she had hidden on her person somewhere. She stuck it in her mouth, unlit, and kept smiling.

“I’m gonna hit the shower and have some lunch. See you gals at mess!”

She walked out of the gym, leaving the younger women alone.

Skylar said, “She must have some anti-aging nanobots in her system or something. I swear she can’t be 73 years old. Nobody that age can move like that.”

Jillian cracked her neck and rubbed the small of her back. Granny was right. Without the mat her fall would have hurt much worse. Plus she was beginning to wonder if her long hair was going to become a problem. It certainly did not seem conducive to fighting.

Skylar gave her a lopsided grin. Nobody onboard the Ultima Mule called Captain Christopher Raleigh by his first name, except Jillian Thrall.

Skylar said, “Come on, let’s go eat. After lunch we can resume your shooting lessons.”

The corridor looked ribbed, with metal protrusions sticking out from the wall every couple of meters, each stretching from ceiling to floor.

“I meant to ask, Skylar, what are these for?”

Jillian pointed at one of the extensions.

“These are barricades to hide behind if someone tries to board us. They would land on the flight deck and try to shoot their way through to the elevator. Our people would take cover behind the barricades and try to keep them holed up at the doorway. It’s a fairly common defensive measure. You should have seen the size of the entrance corridor on the Aquamarine. They had something like a hundred soldiers waiting for us. Of course, Samuel and I took care of things.”

Skylar put her palm on an armory panel near the elevator and it hissed open, showing rack after rack of rifles and pistols.

“Can anybody open the armory?” Jillian said. “Seems like it would be more secure.”

“The Captain, Quartermaster, and First Officer can open it without question. When a regular member like you or me tries, Lootie makes a decision. If she needs to, she’ll query the Captain directly. In this case, she knows we are about to practice shooting, so she’s not overly concerned. No doubt she’ll keep an extra eye on us while we have the guns out, though.”

She handed Jillian a rifle and took one for herself, then closed the panel door.

Jillian said, “At least we don’t need Granny for this.”

Skylar said, “Yeah, this is my preferred method of fighting. A gun levels the playing field, you know? It doesn’t matter how big they are, you can always take them down with one of these.”

She patted the rifle affectionately. Jillian shivered. She knew that Skylar and her brother had killed a lot of people.

They slung the guns over their backs and walked out onto the flight deck. They weaved between fighter drones, heading for the large hexagonal opening with a forcefield on the side of the ship serving as the flight deck entrance. The opening shimmered red and they watched the stars wink by as the ship teleported once every second.

Skylar said, “Give us two moving targets, please Lootie. And a score counter.”

Round holograms the size of dinner plates appeared in front of the forcefield, moving in random patterns. The number zero showed on the top left of the hexagonal opening, and another one on the right.

“You always beat me at this,” Jillian grumbled.

“I know. Before I joined the company, I never even touched a gun before.”

Skylar raised her rifle and shot the first hologram circle. The number on the left turned into a one. Jillian shot at her circle and missed. She fired three more times before finally hitting it. Skylar shot two more during that time.

Half an hour later, they called it quits. Skylar shot 111 discs while Jillian managed to hit 82.

“You’re getting better,” Skylar said as they walked back toward the corridor.

Jillian rubbed her arm where it cramped from holding the big gun for so long. Despite her muscle pain, she was happy with her score. It was a new personal record.

They heard a Ding! from the distant elevator and a moment later Rodrigo Diego-Rodriguez, the ship’s pilot, stepped out of the corridor. He looked around, but failed to see the two walking through the fighter drones out on the tarmac. Instinctively Skylar pulled Jillian down behind one of the small crafts, and they remained hidden.

Satisfied of his privacy, Rodrigo pulled out his portable radiation absorber from a pocket and pressed the button on top. A cloud of silver pixels formed, quickly coalescing into the beautiful blonde and silver shape of Raquel Kirkland.

He handed her a plate of food from the mess hall then stuck his hands in his pockets while she wolfed it down in front of him.

When she finished, she stepped very close to him and looked up into his face.

“Thank you for taking care of me, Roddy. I’m sorry about what I did before. I don’t know what came over me. But I am so glad you are my bondholder now. You’re the best bondholder I’ve ever had. And I mean that with all my heart.”

The plate crashed to the floor as he took her into his arms and kissed her passionately.