Book 4 in the Pirates of the Milky Way series is up on Amazon! Here’s the blurb:

The survivors of the SLS Excelsior are marooned on Halcyon, an abandoned planet limited by 19th century technology. In Epsilon University, the seed of Resistance is forming, and attracting unwanted attention. And on Lute, the Tetrarch sends in the Marshal’s Service to try and recapture his daughter Jillian. Meanwhile, a secret gold shipment to Petra Roe attracts the attention of certain pirates.

I still get hits to an article I wrote a while back, Lasers vs. Lead in Science Fiction: Pew-Pew or Pow-Pow?

In it I explored the use of gunpowder weapons in science fiction, notably in the movie Aliens but also on occasion even in places like the original Star Trek (where admittedly, they were described as antiques).

These thoughts were running through my head while writing the first Redwood book, which takes place on the second-farthest planet from Earth. At that distance, technology has to be super reliable, because fixing things that break becomes problematic. Consequently, a lot of the technology in that book is relatively simple.

I’m reminded of the whole discussion again thanks to my new work in progress, which is an alternative history where technology is about 200 years or so farther along than in our timeline, but most of the key events remain the same. The American Revolution was televised. Drones and AI played a role in the American Civil War, etc.

So yes, in this book, cowboys on the plains get to shoot “pew-pew” weapons at each other.

If you’d like a sneak peek at a rough draft of the first couple of chapters, jump on my mailing list and I’ll send it your way. 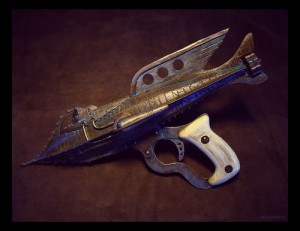