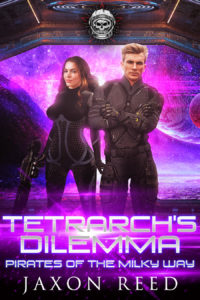 “Incoming bogey, Captain. One half AU out.”

Elijah Maxwell clicked off the connection on the neural net and stared at the main holo on the Ultima Mule’s bridge. Kim and Pak had come up with an idea for a warning grid surrounding Thalia, a planet in the Juventas quadrant they were watching along with the Chaucer Company.

Kim left a grid of drones surrounding the planet at one half astronomical unit intervals, up to three AUs out. It depleted their supply of drones, but the engineers felt this layer of protection would give them ample warning of anyone coming in. All LuteNet needed was a second or two for a heads-up, and they would not be taken by surprise.

The elevator dinged and Christopher Raleigh stepped onto the bridge. He nodded at Maxwell who tilted his head toward the holo.

“I take it they’re just parked out there, right? I mean, if they were truly incoming, they’d have been here by now.”

“That is correct, Captain. They are sitting one half AU out.”

“Do we have an identification?”

“Not yet. They are evidently not under the control of one of the major AIs.”

“Aha,” Raleigh said, nodding. “Smugglers, then. They’re the only ones who like to hop around manually.”

“That’s what I was thinking, too. It also explains why they stopped one jump out. They’re probably trying to make contact with someone on the surface.”

“The question is, are they carrying something in or out? If smuggling it in, we want to intercept before they unload. If going out, we want to pick them up afterward. Lootie? What’s your opinion?”

“At this time there are too many variables to provide an accurate estimate, Captain. However, bearing in mind the reward for capturing enemy ships, and even though this one is not a League Navy vessel, its sale should bring in at least two million credits on the low end.”

Raleigh raised his eyebrows and said, “Can’t argue with that logic. And, it is our turn to grab a ship since we gave the Chanticleer first dibs.”

Maxwell nodded. An independent merchant vessel popped into orbit around Thalia yesterday, oblivious to the recent change in power. The Mule and Chanticleer instantly surrounded it and pummeled their engines with blaster fire, crippling it. The holds were loaded with clothes, food, and consumer electronics. LuteNet estimated its cargo alone was worth a million and a half credits, all of which was claimed by the Chaucer Company.

Raleigh scrolled through his list of mental contacts and stopped on “Lightfoot.” He concentrated and made a connection.

“Hi Krystal. Listen, we found a bogey half an AU out, just parked there. We think it’s a smuggler. Want to help us grab it?”

“Sure thing! I guess it’s your turn to pick up a ship, isn’t it? Say, whoever dreamed up that idea of using drones for a surveillance grid is one smart cookie. Ask them if they’d like a job with Chaucer. We offer great benefits!”

Raleigh ignored the playful, flirting tone in her voice. He said, “Okay. We’re jumping over in ten minutes. I’ll relay the coordinates, or you can just ask Lootie to follow us.”

Raleigh signed off and sighed, partly in exasperation. He looked up and noticed Maxwell grinning at him.

The First Officer raised his hands up in mock surrender.

“Oh, I won’t say anything. Least of all to Jillian. Not a word.”

Raleigh’s lips twitched up a bit at the jab, but Jillian indeed had a problem with Krystal Lightfoot, one of his old girlfriends. The less said about her in Jillian’s presence, the better.

He headed back toward the elevator, already wishing this venture was over and he could put several light years between Ultima Mule and the Chanticleer.

The Mule and Chanticleer were both Hawk-class warships. They appeared suddenly behind the merchant, forward cannons blasting into the aft section.

At the same time, LuteNet popped an anti-teleportation grid around the ship. Practically all military ships and many others now shielded their Wu Drives as a matter of course, but there was always the possibility this merchant had not.

The ship disappeared suddenly, clear evidence that her Wu drives were indeed shielded.

Raleigh said, “Are they still in the grid, Lootie?”

“They are, Captain. They are two AUs out. I will bring both ships in again.”

Ultima Mule and the Chanticleer popped away and appeared in place once again behind the merchant.

This repeated two more times, until at last their combined firepower broke through the merchant’s shields. Its standard drives were blown apart by blaster bolts. Once again, she popped away, and once again the two warships followed.

“Send them a message, Lootie. If they run again, we’ll destroy them.”

“I am sending it, Captain.”

Dillon Dvorak, sitting in the pilot’s seat, turned around and smiled at Raleigh.

He said, “You know, if they were smart they would port somewhere outside the grid so Lootie can’t see them.”

Raleigh smiled back at the young pilot. He said, “They don’t know about the grid. And they’re operating without the benefit of an AI to help make split second decisions like that. Hold on, I’m getting a response.”

He made an adjustment so that everyone on the bridge could listen in. Jillian, Granny, Maxwell, and Skylar were in the group.

“This is Enrique Vega, Captain of the Bronze Iguana, an independent merchant vessel. This is a seditious act of piracy you are committing here!”

Raleigh said, “Captain Vega, you are in Republican-controlled space without permission from her AI. Your vessel is subject to forfeiture or destruction. The question of which one it will be is up to you.”

At last, Vega came back on the line. He said, “Very well, Captain. You have me at a disadvantage. My ship is yours, I ask you spare her crew.”

“Lower your shields. I’ll send a party over via transport immediately.”

Raleigh looked at the people he had on the bridge. He said, “Maxwell, gather up a group and go over there. Bring a sensor and one of our new control pods so Lootie can take command the ship. Check her cargo bins. There’s probably some hidden compartments on board, too. Maybe Lootie can suss them out once the pod is installed.”

He said, “Aye, aye, Captain. Skylar and Dillon, come on you lovebirds. Let’s round up a couple more, grab some guns and go over there.”