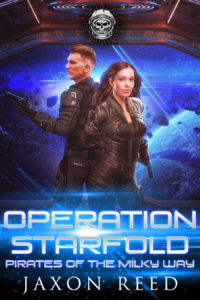 I’m happy to announce the Amazon version of Operation Starfold, Book 7 in the Pirates of the Milky Way series, has been released.

The Amazon version contains bonus chapters not available elsewhere, except to Patreon subscribers.

Many thanks for all the support and well-wishes many of you have sent my way in the writing of this series. We are 10 months, and 7 books in, with more to go.

Julia popped into existence inside the gaming environment called New York, 1985. She appeared in Grand Central Station and walked out with a crowd of other newcomers signing in.

In this hedonistic virtual environment, League subjects could engage in activities otherwise prohibited in real life. Of course, the government made sure they suffered consequences for it.

As the saying goes, Julia thought, there is no such thing as a free lunch. The League made sure of that.

She watched people who immediately bought and took drugs after leaving the entry area get mugged. Some of them were stabbed, painfully bled out and forcibly ejected from the game right away.

Others, soliciting prostitutes, were occasionally beat up by angry pimps for not showing proper levels of respect or other perceived slights.

But not always . . . Some managed to indulge in bacchanalia without immediate ill effects. Julia knew that the game’s designers, under the direction of a government office, were engaging in a sort of reverse intermittent reinforcement.

A newcomer who escaped “punishment” for his or her actions the first couple of times they indulged, would face profound disappointment when they finally met due consequences. Subsequent trips to the digital playground would prove ever more difficult to score pleasurable experiences.

Julia had read the whitepaper on the plan, outlined by some very smart professors at Epsilon U. Rather than rewarding bad behavior, the game turned the tables and made them psychologically frustrating. It was a most excellent government conspiracy in an effort to control the online behavior of billions of people.

However, despite the efforts to tamp down the pleasures of acting bad, the company that owned the gaming worlds, in this case Sergio Productions, needed to make a credit or two in order to keep the virtual doors open. So, she also knew they often toned down the “penalties” for engaging in bad behavior. There were still rewards to be found amid all the negative feedback.

Also, a player might get killed by a mugger, or drug dealer, or pimp, but nothing would happen in the real world. And nine times out of ten, they would come back online chasing that ever more elusive high. Sergio Productions used the law of diminishing returns for profit while the government tried to leverage it for social engineering. The two were at odds, but so far the government had not balked at the arrangement.

Julia ignored the sketchy people as well as tourists. She made her way to Times Square, walking about 800 meters through the purportedly faithful rendition of the grimy squalor of late 20th century New York City.

She stepped down into the Times Square-42nd Street Subway Station and Port Authority Bus Terminal complex.

Several people milled about on the platform, and she waited patiently for a while. A subway car stopped and some exited while others boarded.

Convinced the coast was clear, she opened an unlocked door leading to a service corridor along the back wall. She pulled it shut behind her and breathed a sigh of relief. Then she turned and faced the featureless hallway before her.

She dutifully slapped the wall, looking for a glitch in the game that would let her step inside the building blocks of the virtual world. She found it on her third try this time, and stepped into a dead space of monochromatic orange columns and tight passageways. Ahead, she knew the “Font of Knowledge,” or whatever the programmers called it, would let her communicate with people in other gaming instances, even in Republican territory.

“Stop right there. Hands up!”

She turned and an officer wearing the blue uniform of NYPD aimed his sidearm at her. Three more men stepped out from behind the orange geometrical columns comprising the virtual skeleton of the building.

Julia was surprised to see they were aiming ancient revolvers at her. Surely the NYPD used semi-automatics by 1985, she thought. Hm. Evidently not.

A fifth man stepped out of hiding, this one wearing the plain gray suit of an undercover detective.

He flashed a badge at her and smiled.

“Going somewhere, sister? Maybe for a talk by an isolated water fountain or something?”

The first cop crept closer. He took one hand off his pistol and grabbed a pair of handcuffs from his belt.

Julia waited until he came within range and thwacked his gun hand away.

She grabbed the cop and pulled him close as the others opened fire.

The officer’s body jerked as slugs from the other cops hit him. She reached over and grabbed the pistol in the dead man’s hand while dropping his body to return fire.

She ran to the glitch and jumped back into the corridor. Then she ran to the door, still holding the officer’s revolver.

How many shots do I have left? Three. Stupid game.

Back in the glitch, the detective made a very anachronistic motion, touching under his ear.

He said, “Suspect is on the move. Heading to the subway platform.”

On the platform, she jumped out into the crowd and a few people looked her way.

Several people screamed and rushed for the exits.

Six more NYPD officers rushed in, aiming their sidearms at her. She saw two more in suits.

The screams intensified as the officers opened fire.

A slug tore into her shoulder, and she felt the pain register in real life, although she was not shedding blood back there. The neural connections were intense, though.

Instead of aiming at the uniforms, she squeezed off a round at one of the detectives, figuring he was more likely a real person instead of an NPC.

His head blossomed red, and he went down. Julia felt a fleeting moment of satisfaction as she moved onto the subway platform, now void of people.

At the back of her mind, she wondered how accurate the game portrayed old-fashioned ballistics. That shot was over 20 meters, and from what she knew about ancient weapons, pistols were not extraordinarily accurate at longer range.

Two of the next bullets got her, accuracy algorithms helping the other side this time. She felt one go into her thigh, shattering bone. Another plunked into her stomach. She heard the third whiz by her ear harmlessly.

She went down on her knees and noticed all the blood for the first time. Her own virtual blood. She was covered in red, and it dripped down onto the platform.

One of the detectives ran up, this one from the glitch and the service entrance. He made a downward motion with his hand at the NPC officers.

He said, “We want her alive for interrogation. Don’t let her exit the game just yet. We’re zeroing in on her location IRL.”

Julia stood up in a sudden burst of renewed energy and shot him point blank in the face.

His body fell backward as he exited the game.

She looked down the tracks and saw a train coming, the light approaching rapidly along with the unmistakable sounds of the subway. This one did not slow down. It was not going to stop.

More NPC officers flooded the area, all aiming guns at her. She saw two of them carrying a net, others with rope. They still intended to capture her alive, evidently.

As the train rushed into the station, she jumped out on the tracks, right in front of it.

Her virtual body thumped into metal.

She felt intense pain from the impact, then exited the game. 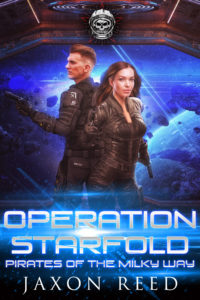 Book VII of the Pirates of the Milky Way is Operation Starfold. Chapter One will be released tomorrow on this site and Royal Road. To read ahead, click over to Patreon.